Rivian, the electric vehicle maker that has yet to record any meaningful revenue, surged on its Nasdaq debut, with an opening market value of more than $100bn, greater than Ford and General Motors.

The company’s shares began trading at $106.75 per share, 37 per cent higher than its initial public offering price and almost four times its valuation in private markets less than a year ago. That gave it a market capitalisation of $91bn, or $107bn on a fully diluted basis.

Before deductions, the company will raise about $11.9bn, the biggest IPO haul for a US company since Facebook’s flotation in May 2012.

Investors are looking to ride the wave of optimism surrounding companies in the electric mobility and automotive sectors, eager to buy into a company some believe can emulate the success of Tesla, which surpassed a $1tn market capitalisation in October.

“We have well over a billion vehicles on the planet that need to be switched out for electric vehicles over the next 10 to 15 years,” he added.

His stake in the company was worth $1.4bn after the offering. As the sole holder of Rivian’s Class B shares, the 38-year-old will retain 9.5 per cent voting rights.

Rivian’s arrival on the Nasdaq stock market, where it will trade under the ticker symbol RIVN, represents a big payday for Amazon, whose stake at the IPO price was worth $12.5bn.

Rival carmaker Ford will hold a 12.1 per cent stake post IPO, worth $8bn at the listing price. The company backed Rivian even as it posed a threat to the start-up’s success with the upcoming Ford F-150 Lightning electric pick-up truck, said Jessica Caldwell, executive director of insights at Edmunds.

“Although the Detroit automakers have often been portrayed as dinosaurs by the Silicon Valley crowd, the reality is that they have decades more experience in truck development than their start-up competitors and are resourced to produce high volumes at lower cost,” Caldwell said.

The market’s reaction highlights the sky-high expectations for Rivian, which has incurred almost $1bn in losses in the first half of this year, and estimates it may have lost up to a further $1.28bn in the third quarter.

Much of the proceeds from the Rivian IPO will go towards increasing production capacity at its plant in Normal, Illinois as well as future new facilities.

“A lot of them are labour-related issues,” he said. “We’re closely partnering with suppliers to ramp up those teams, in some cases putting some of our team on site with the suppliers, helping with first or in some cases second shift.” 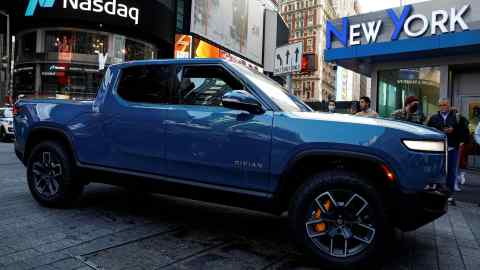 Rivian has just over 50,000 pre-orders from consumers for its R1T pick-up truck and R1S sport utility vehicle, as well as an order from Amazon for 100,000 commercial delivery vehicles to be delivered by 2025.

So far it has managed to deliver just a handful of these vehicles. Scaringe insisted the company could handle production of all its models concurrently.

Days ahead of the market debut, Rivian was sued for gender discrimination by former executive, Laura Schwab. Scaringe declined to comment on the specific allegations surrounding Schwab’s dismissal last month, but said the company was investigating the claims of a “toxic” culture.

He added: “We do fully disagree with any of the characterisations of our culture and how we work together.”